The book cover for the 3S's. 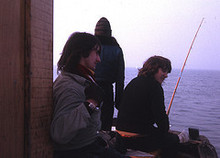 The Author and DJ on a fishing trip

Winter 2012-13 proved quite horrible. I'd finished lecturing and, apart from seeking a couple of weeks sunshine in the Mediterranean, I had little to occupy myself. What to do? I decided to re-edit SHIT with an intention of having it published; surely its main characters and their families would no longer be embarrassed. As I edited, I thought of anecdotes that were on a different timeline. I began capturing my memories. As I did so, I quickly came to the conclusion that Shit again featured heavily. The 3S's emerged - Shave, Shit, Shower. I had considered 4S's but couldn't get enough Shex to include. I've included some facts about a few of the anecdotes for your perusal.

The 3S's are all true anecdotes, taking place from my childhood in the 50's through until the current time. Some again feature the central characters from SHIT but this time I have introduced many more friends together with some family. The stories take part in several locations including exotic locations such as Morocco, Penang and Venice, though most took place here in the UK in such (un)exotic locations as the Elephant and Castle. Along the way, I manage a bit of name dropping, especially in 'Shithouse Rock'. This anecdote features my good friend DJ. The photo above and to the right shows him and me fishing off a boat from Southend in 1975. A bad day's fishing such that the student newsheet reported, 'The only thing these anglers caught were crabs'. That did not go down very well!

The 3S's is due for publication Autumn 2013. It is being designed as a stocking filler and pan-side companion. I've included a couple of photos beneath. More can be found in my photo gallery. 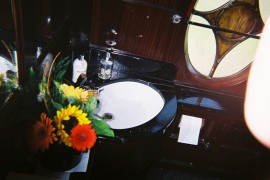 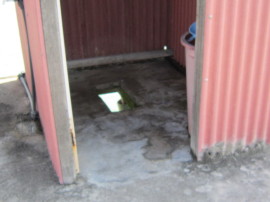 Above - A cubicle on the VSOE

Alongside, the outside loo on Penang's

I know which I preferred!