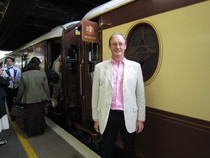 Work: Retired and living in Spain. That's me getting on the VS Orient Express at Victoria, destination Venice, for my 60th birthday; an anecdote I relate in the 3S's

I was born and brought up in Stourbridge, attending King Edward VI Grammar School. At aged seventeen the careers master advised, ‘Your choices are computing or electronics’. I chose civil engineering, joining George Wimpey, then the World’s largest civil engineering company, as a sandwich degree student. During school holidays, I’d worked in a local factory, Brettel & Shaw, assembling Elsan chemical toilets, the ones so integral to sixties’ caravanning holidays and the Wimpey site toilets with which I would soon become familiar.

By the time I was twenty one, I’d been nearly blown up on site and had experienced being flown off
the side of a Welsh mountain in a wingless Land Rover. ‘Null points’ for the spectacular thirty foot dive with a one and a half sideways role. Civil Engineering was proving too dangerous a career. Escaping back to ‘The City University’, London, for six months of each year, I’d grown shoulder length hair and became caught up in the music scene within which I saw many top rock bands, even promoting quite a few of them, and encountered the darker side of several celebrities. My web site will tell you more of these bands.

I have enjoyed a long and successful career in ICT, specialising for most of it in Health Informatics. I came full circle a few years back when I was appointed a Visiting Professor at City University where I deliver the ICT module on its Masters Degree in Construction Management. After living in Surrey for twenty five years, we moved to Spain, Ciudad Quesada near Torrevieja, where we had a dream villa designed and built.﻿