I began at City in February 1970, having finished my A Levels in June 69 and then having spent the intervening months with George Wimpey & Co. in their Bishopbriggs' office, just north of Glasgow, where with five other newly indentured civil engineers we received brilliant training in surveying. I lived in digs in Kirkintilloch, the only 'dry' town in all of Britain. It had no pubs, no off licences and not one shop was licensed for selling alcohol; it was truly dry.

I lived in the Northampton Hall of Residence on Bunhill Row in my first semester at City, just doors away from Ma Kray, the mother of the infamous twins, but more usefully next door to the Whitbread Chiswell Street Brewery. For my second semester, I shared a flat on Lancaster Grove, Belsize Park, with three other student civil engineers. That's me sitting on my bed. Racing driver and TV commentator Tiff Needel kindly relinquished his bed for me as, being on the opposite semester, he was back off to site with Wimpey. 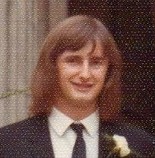 Being on site in Winter, I grew long hair to keep my ears warm. This was me at my friends' wedding in 1973, so very possibly me as I appeared when the events of S**T took place; just no donkey jacket or wellies that day. 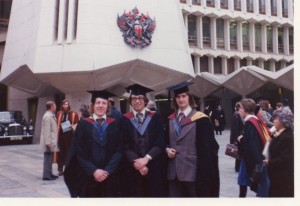 I graduated in November 1974, the Graduation taking place at London's Guildhall - degrees presented by Sir Murray Fox, the Chancellor and Lord Mayor of London - followed by a service in St. Paul's Cathedral. The photo shows, from left to right, John, Geoff and me. I'd had my hair cut short specially for the day. After the Guidhall ceremony, moms and sisters went to the service, dads and lads went to the St. Paul's Tavern. Then all back to the University for an afternoon buffet.

I began my career at City University and also finished it there. In 2007 I was invited to help establish its new MSc in Construction Management. Using contacts, especially Barry Wood, this cascaded into inviting several specialists in their field who, together with lectures from the Cass Business School, formed the caucas of lecturers necessary to commence this course in 2008. I was to lecture on ICT (Information & Communication Technologies) and, also, ended up teaching the use of Microsoft Project. In 2009 I was appointed Honorary Visiting Professor. The course became very popular attracting students from all over the World. Sadly, I had to bow out in 2013 because of our impending move to Spain. The course continued until Covid caused its demise.